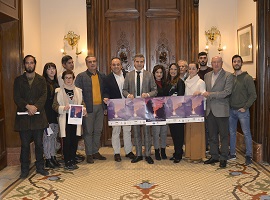 Granada celebrates for the first time Winter Solstice with an extensive programme of leisure, scientific and festive activities.

Granada celebrates for the first time Winter Solstice with an extensive programme of festive, scientific, leisure and cultural incluiding music, theatre, dance, story-teller, conferencies, sport exhibitions and other performances in different streets and squares of the city. This initiative GranadaHenge, launched by the City Council and the Federations of Hotels and Trade, borns as the councellor of Strategic Projects said, César Díaz, to show a unique show, an iconic sunset that we wish to become a reference of future in Granada..

Díaz, that remembered another iconic sunsets in Granada, like Mirador de San Nicolás, that every year attracts a great number of visitors, has explained that every 21 of December, matching with winter solstice, the sun goes down through the Vega and gets directly to the city center completely aligned with street Recogidas, creating a unique beauty image.

With a view to promote worldwide this magic moment and ease its pleasure for granadians and visitors, the City Council has decided to run this year project GranadaHenge, a touristic, cultural and leisure initiative that also means the inclusion of this city to a symbolic net of Henge Cities, like Toroto, Chicago or Manhattan, ha añadido el edil.

You can check the programme of activities on the website of Granada Henge.

Scientific aspect of this programme will be on conferences in the Plenary Room of the City Council, at half past six in the evenig. The director of the Experimental Station in Zaidin (EEZ-CSIC), experts in Photosynthesis and vegetal stress, Matilde Barón Ayala will talk about The sun: friend or enemy, while José Carlos del Toro Iniesta, investigator of the Astrophysical Institute of Andalusia (IAA-CSIC), member of Solar physics and main co-investigator of the SO/PHI instrument of Solar Mission Orbiter (European Space Agency), will talk about The Sun:a history of 50 years in 4.500 million years.

After standing for this initiative to have an specific place in the touristic and cultural agenda of the city, both César Díaz and the Councillor of Culture, Lucía Garrido, have agreed that GranadaHenge must be a excuse to gather thousands of people in our trade center, our historic center and became a leisure and hotel package first rate to visit our city.

At the presentation of the programme of this project -where have attended representatives of the organizations and associations participating- have taken part beside councellors César Díaz and Lucía Garrido, the president of the Federation of Hotel Management and Tourism, Gregorio García and the researcher of the Astrophysical Institute in Andalusia (IAA-CSIC), José Carlos del Toro.

Take a photo of this magical moment in Puerta Real or activities performed and join in, winning one of these prizes:

These are the "rules of the competition"