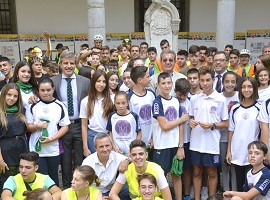 Attended this act the Councillor of Citizen´s Protection, Mobility, Strategic Projects and Metropolitan Office of the City Council of Granada, César Díaz, the Delegate of Education, the provincial assistant manager of Traffic and the Mobility coordinator.

Students of schools Juan XXIII Chana, Ángel Ganivet and Andres Segovia arrived on bike following a route organised by the Educational Center in Road Safety and accompanied by a Cyclist Unit of Local Police of Granada. School centers Arrayanes and Padre Manjón arrived on Public Transport.

The City Council of Granada gives on 20 September the european awards Stars to six school centers of the city for their contribution and commitment with substainable and healthy mobility. Schools awarded are Juan XXIII in La Chana, Andrés Segovia, San Isidoro, Ganivet, Arrayanes and Padre Manjón. The prize was a diploma and presents for students that have joined this initiative.

The project Stars encourages and award those educative centers that encourage between their students substainables displacements, safer and healthier on foot or bike. The City Council joined three years ago this project with an agreement with the National Department of Traffic.

Awarded school have also developed, in cooperation with the Municipal Center in Road Safety, activities linked to the pedibus, initiation cyclist workshops, intercenter routes, creation of educative resources, road safety games on the school premises, exchange of experiences in the Faculty of Sports Sciences, publications and round tables.

We have to create a city where people have more and better spaces than cars, has remarked César Díaz, councillor of Mobility, on the delivery of prizes. In the act in the patio of the City Council have also joined Julia de la Cruz Ruiz, the provincial assistant manager of Traffic, and Carlos Ruiz Cosano, concillor of Education.

César Díaz has pointed out that the bet of the municipal government team is a city with a purer air and this must be teached from a tender age.