Home  :  News : Proposal for the accession to BiciRegistro

Proposal for the accession to BiciRegistro 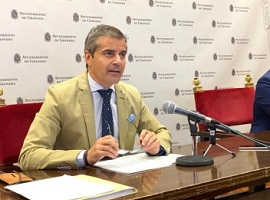 The councellor of Mobility, César Díaz Ruiz, has presented the proposal for the accession to BiciRegistro, a network that, in cooperation with Colegio de Gestores Administrativos, allow to deter bike and PMV thefts.

Local government will bring to the Informative Commission of Mobility the accession of Granada to the National Bicycle and PMV´s, Biciregistro, a project promoted by Network of Cities for the Bicycles , of which are part more than 500 municipalities, that will ease grenadines to identify their vehicles in case of lost or stolen.

The councellor of Mobility, César Díaz, has remarked that the project is part of the municipal commitment for Sustainable Mobility and, in this respect, reinforce security of users of this mean of transport and is one of crucial measures that, with the 75 kilometers of reserved lanes for public transport, bikes and PMVs and the Parking Network Project that will be presented shortly, boost the use of these means of transport in the city.

In the informative presentation of this initiative, that should be adopted by Plenary after the opinion of the Commision, the councellor of Mobility, César Díaz, has explained that this network is made to dissuade robbery and identificate owners in case of theft or dissapearance of vehicles, impeding illegal trade and allowing the recovery of bikes and PMV´s using digital tools.

For the councellor, safety in these mean of transport is a key question to encourage and promote their use, because, as the Bicycle Barometer published every 2 years by DGT says, a 16% of users have suffered a robbery in the last 5 years.

This a realty that, in his own words, addes to the gradual growth of the use of these vehicles in the last years with more than a 2% people travel around the city on bike: promote bike and PMV´s and the improvement of its security has been a commitment with the citizens for many reasons.

Díaz has assured that there is an increasement of 2,2% users of these vehicles to get to work and an increasement of 8,6% people, most of them students, that use them for study purposes. Also, he has given information about the number of PMVs in the city that have increased to 1.500 at present and maybe get to 7.000 at the end of the year.

In his own words, this reality and the commitment to encourage sustainable mobility and the use of alternative mean of transport compels us to reinforce security and protection of these kind of vehicles. We are also running other initiatives as the implementation of 75 kilometers of reserved lanes to share circulation with public transport, or the Parking Network Plan to be presented soon.

As he detailed, the accession to the Network and the system will allow two kind of registration, an Online Free Registry, and another one, also digital, that will be validated with a signing kit. The reduction of thefts will be achieved thanks to a standarized registry that have a unique number and a QR code for each vehicle; gather all data in a list or national database, and matches each bike or PMVs with their owner has assured.

The way this system operates is, once user registrer in this system, will get a signing kit consisting on four stickers or adhesive vinyls that, in case they are removed, leave an adhesive mark.

César Díaz has pointed out that the network eases police work of recovering vehicles because in the database will be registered both stolen vehicles and founded ones that, inmediatly will be returned to their owners. So, beside on line registry and gratuity benefits, the system has other benefits as national coverage so police will have access to those vehicles that have been registered apart from the geographical area where each bike has been registered.

Finally, the councellor of Mobility has appreciated the Colegio de Gestores Administrativos of Granada, Almería and Jaén, because validation points of the system will be the offices of these administrative agents, due to the agreement between the Cities for Cities for the Bicycle and this Council.

The president in Granada of this Official College, Fernando Nogueras, desires that the proposal has the approval of the municipal commission of Mobility and the Plenary so this project came true, because it will mean a step forward in security and make Granada a more sustainable city, with consequent benefits for health and welfare.

Also, Nogueras has indicated that the Colegio de Gestores Administrativo has the knowledges and requirements to validate this system.