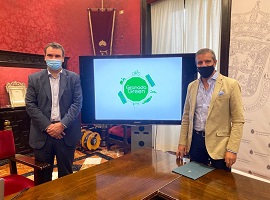 A logo of a green heptagon inspired in patio de los Leones of Alhambra surrounded by seven sustainable means of transport will be the image of this campaign run by the City Council to arise conciousness of the necessity of use non polluting vehicles in the city to achieve a healthier and more humane city.

This campaign Granada Green, that has been presented today in the City Council of Granada by the councellor of Mobility and Citizen´s Safety, César Díaz, and Francisco José Gámez, manager of Transportes Rober, concessionary company of urban transport service, meanse a step forward of the goverment team in our bet for a sustainable mobility, an appeal to citizens to moderate the use of private vehicle in their displacements, said.

So, as he said, the City Council, in cooperation with Transportes Rober, addes this campaign, to the creation in last fourteen months of sustaninable infrastructures needed to increase the use among people of bus, light rail, motorbike, bicycle, skates and specially foot displacements around the city. Beside these initiatives the manager of Rober has reminded the recent incorporation of 22 new hybrid urban vehicles.

César Díaz has pointed out that with the campaign the government team wants to warn about the impact of pollution on human health, and also means, as he remarked, an appreciation to those people that actively use non polluting vehicles on their daily displacements.

For the conuncellor of Mobility and Citizen´s Safety, it is the moment of change, because it is clear that a sustainable mobility means an improvement on citizen´s health, so he reaffirmed a firm commitment to make great changes on mobility to make this city more habitable, healthy and green.

So, Granada Green, in its first stage, that begins now under the slogan ¿Qué Granada quieres respirar?, arising conciousness on citizens with images, that shows the effects of pollution in the cityd,to reconsider about its effects.

Images to be shown in this campaign are a photomontage of a street, very identifying of the city, where can be shown the contrast between the effects of pollution, in black and white, has specified, and one part of the image we can see the beneficial effect of sustainable mobility.

Images will have data to aware from severe consequences of air pollution in our city, where, according to sanitary data, 35.000 people suffer diseases caused by pollution

The campaign, that began in mass media this summer, reinforces from tomorrow Tuesday, 8 of September, with several posters around the city and the broadcasting of a video on TG7 and social networks.