Campaign on novelties in Road Safety 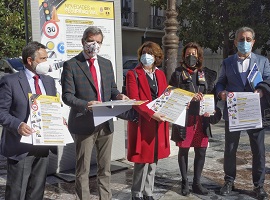 The City Council promotes a campaign to inform the public about developments in Road Safety and how these affect Granada.

The City Council, in collaboration with the General Directorate of Traffic and the support of the Granada Driving Schools, has promoted a campaign to inform citizens about new developments in road safety that have come into force and others that will enter next May; an initiative that the mayor of Mobility, César Díaz, has framed in the Granada Green Strategy aimed at making the capital a more sustainable, humane, healthy and livable city.

César Díaz began by thanking the DGT, the Traffic Education Center and the Granada driving schools for their work and collaboration to bring these important news to the publicand after pointing out changes that came into force last November (relating to driving licenses, people with locomotive system problems and motorcycles); has briefly recalled another important change introduced in January of this year and referred to the regulation of vehicles with reduced mobility.

In his speech, he explained the regulations that will come into force on May 11 relative to maximum speed limits in cities that are going to be moderated, something that was necessary and in this sense he has reviewed the new limits taxes on urban roads: 20 km / hour on single carriageways; 30 kms / hour on roads with a single lane in each direction; and 50 kms / hour for roads with two lanes or more in each direction.

In this regard, he recalled that in Granada these limitations are more restrictive than those proposed by the DGT in order to calm traffic, pacify speed and bet on citizen security and sustainable mobility .

And alongside this security argument there are other reasons that have to do with efficiency, the environment and sustainable mobility . In this regard, he has referred to the advantages of traveling on foot; public transport, and active media and VMP.

In this sense, Díaz has positively valued the implementation of the pacified lanes that are being used by 65% by the recipients of those lanes, which are public transport, bicycles, scooters or motorcycles, while the remaining 35% are cars. It should be remembered that, although these vehicles can access this lane, the priority is always for public transport, bicycles or scooters, so we must respect their times, their space, their maneuvers , said Díaz.

On the other hand, the mayor recalled that although at this time drivers who exceed the speed are not being sanctioned, in the future they will be subject to a fine who when accessing these lanes fail to comply with the speed limitation. Finally, he referred to the road regulations in process - referring to radars, mobiles, seat belts and other issues and reminded the public that those who wish to have the guidelines contained in this campaign, can download the brochure in the QR code that appears in billboards and brochures distributed throughout the city.

During the informative appearance, the mayor was accompanied by the provincial deputy chief of Traffic, Julia de la Cruz, and the president of the Andalusian Driving School Federation, José Blas Valero, who thanked the City Council for promoting vital information for the citizen and for the improvement of traffic in the city .