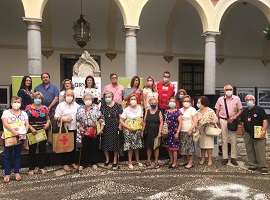 On June 15, the United Nations has declared the World Day of Awareness of Abuse and Mistreatment in Old Age.

The Granada City Council, through the Mobility Councils (Center for Road Safety Education) and Social Rights, organized a transversal event in which the Red Cross and the Official College of Psychology also took part to pay tribute to the elderly who They occupied the Patio of the Plaza del Carmen.

The Conference was chaired by Luis Salvador, Mayor of the city, José Antonio Huertas, Councilor for Social Rights, Manuel Mariano Vera, Dean of the Official College of Psychologists and President of the Professional Union and María Eugenia Rodríguez Bailón, President of Cruz Granada Red.

The group of Older People is a priority group for all the administrations and entities involved and this was demonstrated in the various interventions that took place. Workshops were given by the head of the Red Cross in the Senior Program, Isabel Vega Betoret, and the Director of the Municipal Road Safety Education Center, Mª Asunción Tárrago.

In these workshops, information was given to help facilitate the quality of life of our Elders, so deserved after their altruistic life trajectory in such difficult circumstances, much emphasis was also placed on the importance of Good Treatment to the elderly They deserve it since they give us: experience, wisdom, historical vision, and they are the pillar and link of many families.