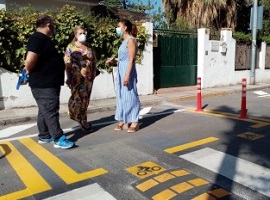 The Paseo de las Palmas, a narrow street with a large influx of traffic since it allows the exit of the City Center through the Realejo towards the A395 and with the existence of an educational center in it, incorporates new horizontal signals aimed at increasing accessibility and road safety by allowing the expansion of the pedestrian space of the street and discouraging drivers from exceeding the speed limit of 20 kilometers per hour.

It is, in the words of the acting mayor and Councilor for Mobility in the Granada City Council, Raquel Ruz, a very simple intervention aimed at improving and increasing road safety with which the government team responds to a historic request from both the residents of Realejo and Barranco del Abogado, as well as the parents of the existing educational center on the street, who have long asked for a municipal intervention to improve road safety .

As explained, the street, where the Duende municipal nursery school is located, has very narrow sidewalks, which makes it difficult even for carts to pass. part of the drivers, which increases the danger both for pedestrians and for the children who go to the educational center , he said.

Accompanied by the Councilor for Culture, María de Leyva, as well as by the neighborhood representatives Lola Fandila, president of the Barranco del Abogado neighborhood association, and Alejandro Corral, from Realejo-San Matías, the Councilor for Mobility has advanced that the intervention is part of a package of measures that the government team is going to carry out, hand in hand with the residents of the entire neighborhood to provide a definitive solution to the mobility of this street, which it would go through a future urban intervention .

The action that has been presented to the media today has allowed the extension of one of the sidewalks through the use of a section of road, duly marked with stripes painted in white, at the same time that they have been drawn in the lane for traffic yellow zigzag lines on the road, which makes a tunnel effect, which gives drivers the feeling that the lane is narrower than it is , he explained. This is how we discourage people from slowing down to 20 kilometers per hour, which is essential in semi-pedestrian areas like this one .

The intervention has been completed with the installation of new donkey donkeys on the road to reduce speed in the street and a bicycle parking space, located in the vicinity of the educational facilities and a pedestrian crossing. In turn, the space for parking has been marked.