Night bus lines are back 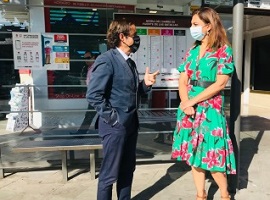 The city of Granada has recovered the Búho Bus service on weekends, and has extended the last departure time of lines 5, 9, 11, 13 and 21, which is set again at 11:30 p.m. hours "as before the pandemic." The Councilor for Mobility, Raquel Ruz, has framed these measures "in the City Council commitment to recover normality and so that people are encouraged to use public transport that is safe, efficient and comfortable".

"Hand in hand with the company Alsa, which right now manages Transportes Rober, we are trying to improve public transport in our city and bring it to levels of excellence that allow us to recover travelers who have been lost during the pandemic", he explained . "In a city where the main problem we have is air quality, public administrations have to encourage the use of public transport at all times of the day."

Raquel Ruz, who has been accompanied by the director of the Alsa company in Granada, Valeriano Díaz, has pointed out that "the return to normality" of public transport is also a consequence of the fact that the city is "experiencing a gradual and continuous back to normality "that existed before the pandemic.

"We are seeing how more and more people are encouraged to go out, to consume, to visit our bars, restaurants and leisure centers or how the city is receiving much more tourism than in previous months, and this has to have impact on public transport", has specified. "The first step was to extend the night hours of some lines, which are recovering their normal operation to cover both the people who are encouraged to leave, and the workers themselves who can use public transport to return home."

"Also to provide coverage to people who are already beginning to enjoy the city during the weekends, we have launched the so-called Owl line, which was dispensed with during the pandemic, and which is now back in operation Fridays and Saturdays in their usual hours, from eleven thirty to two", he added.

After remembering that the Búho Bus service has been operating since August 15 and that the update of night schedules began gradually since last August 9 "and will in practice mean a return to the schedules and frequencies prior to the pandemic ", Raquel Ruz has influenced the constant application in public transport of all current sanitary measures due to Covid-19.

For his part, Valeriano Díaz, director of Alsa in Granada, has agreed with the mayor of Mobility that "we are giving an agile and effective response to the demands of users to apply line schedules prior to the pandemic and according to the sanitary measures in force as soon as we have been able ". Needs that, as he has stated, "have meant that we have had to increase the hiring of personnel, especially to attend the owl services, which means a firm commitment to employment by the company when the service requires it".

Díaz, who has advanced that during the second weekend of operation of the so-called Bus Búho service "we have almost 50 percent of users than in August two years ago", has concluded that "mobility is something that As long as we are not brave and we do not speed it up, people are not going to use it and we are going to lose value ".