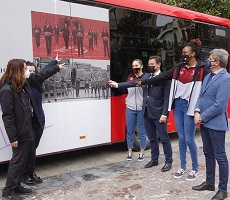 Granada City Council, Transportes Rober and RACA Granada come together to celebrate 8-M with a campaign on buses and the media that projects the image of women in different work environments


The mayor of Granada, Luis Salvador, had words of congratulations for the Rober workers, the RACA players and all the women who fight for equality and who, with their daily example, achieve it, well equality is a matter of society, of men and women who bet on it every day and make it a reality from their different areas of action .

The City Council of Granada, the concessionaire of urban public transport, Rober and the Raca Granada Sports Club have joined forces to celebrate 8M with an image campaign on buses and the media that, under the slogan Woman, don't let anyone tell you that you can't , Rober's workers and basketball players from the Granada club exchange their roles to show that they are capable of facing any challenge .

This was explained by the mayor of Granada, Luis Salvador, for whom equality is not negotiable; It is necessary to guarantee it from a diagnosis of the areas that must be changed and with a strong commitment to instilling these values; sensitizing and raising awareness in society, starting with children .

When we all truly understand that we live in a world of equal rights, duties, opportunities and freedoms; and that no one is owned by anyone; equality will be full and effective the Granada councilor has concluded.

In this sense, Luis Salvador has had words of congratulations for the Transportes Rober workers, the RACA players and all the women who fight for equality and who, with their daily example, achieve it, because equality It is a matter of society, of men and women who bet on it every day and make it a reality from their different spheres of action .

For his part, the Councilor for Mobility, César Díaz, has started by assuring that on this important day, this campaign is of special interest and enthusiasm because it means putting women in traditionally leading professions at the center of attention by men with a direct message that emphasizes that there are no limits for women and that they can face all challenges .

César Díaz has ensured that more than 40 women make up Rober's workforce among conductors, auditors and service regulators, a fact that as stated evidences the commitment of the company and the City Council for equality and has appealed to values ​​such as co-responsibility, conciliation, access to employment that, also in some way, are present in this campaign, both in the spot created, and in the labeling of urban buses .


Finally, the mayor recalled that if last year Rober was the main sponsor of the special match played on March 7 within the framework of the 8M celebration, on this occasion both entities have decided to collaborate in a campaign to continue making the image of women visible and projecting in different work areas . Likewise, he has stressed the need to continue working on equality in order to build a just, socially and economically developed society that allows us to move forward and resolve current problems such as co-responsibility and personal, family and work conciliation; promote access to employment, eliminate the job gap and glass ceilings; and compliance with the State Pact against Gender Violence.

Thus, athletes from Granada have participated in the recording of a spot in which players can be seen driving a bus or regulating services in the Mobility control room; and the conductors and revisers of the urban lines practicing basketball drills. Therefore, according to César Díaz, audiovisual work shows that women can face any challenge, in any work or professional environment .

In addition, with this campaign, the City Council and Rober demonstrate once again their support for Granada sport, and this time more specifically for women's sport, by joining the RACA Granada first team, to celebrate this International Women's Day, within the framework of collaboration that the company maintains with the sports club.

During the informative presentation, the mayor and mayor were accompanied by Rober's manager, Francisco Gámez, as well as the club's players Rebeca Rodríguez, Verdine Warner and Ornella Santana, as well as the driver Mª Eugenia Moral Huertas and the bus inspector urban Mª Dolores Martínez Juarez.