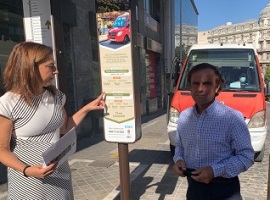 New information in three languages, more visual and easier, improving the information of the tourist bus lines to facilitate the transfer to the visitor.

The City Council of Granada improves the information related to the municipal public transport lines that connect the city with the monumental complex of the Alhambra with the installation of new information panels that directly, visually, easily and in three languages ​​ informs the user and visitor of the itinerary and duration of the journey.

The acting mayor and councilor for Mobility, Raquel Ruz, accompanied by the managing director in Andalucia of Alsa, a company that manages Transportes Rober, concessionaire of the public transport service in Granada, Valeriano Díaz Revilla, reported today during the presentation of the new signage that the measure is part of the commitment of the new government team to make public transport a more sustainable, accessible, efficient and much easier and more comfortable service for citizens and visitors to our city .

The new information panels solve, in the words of the councilor, a problem that we had detected among users of tourist lines - C30 (Alhambra-Centro) and C32 (Alhambra-Albaicín) - since they generated confusion to the extent that they did not The duration of the journey was detailed, so if they chose the line C32, which although it made a beautiful route through the Albaicín, being longer, prevented him from arriving at the time they had to enter to make his visit to the monumental complex.

With the new staffs, in which, in three languages ​​-Spanish, English and French-, it informs in a very simple way, with just a glance, it shows the options that the visitor has at the time to take public transport to access tourist sites, in such a way that we facilitate and make your visit to our city more comfortable and pleasant , he said.

Raquel Ruz has indicated that the media responds to a new stage in the management of mobility in Granada in which both the new government team and Alsa, a company managed by Rober, the concessionaire of the public transport service in Granada, we are going to work hand in hand with several objectives , he said, and then cite as one of our main challenges, to work for more sustainable mobility and also to improve air quality.

After recalling that the result of this challenge has been the reorganization of the public transport lines promoted in the previous municipal mandate, of which he highlighted that it allowed to recover with the new lines a lot of travelers who had been lost After the implementation of the LAC, carried out during the mandate of the Partido Popular , Raquel Ruz has highlighted the success of the current network of bus lines, as shown by the previous government team that has not carried out no modification .

For his part, Valeriano Díaz Revilla has put the accent on commitment of Alsa to a comfortable, close, efficient, also effective, fast when necessary and safe public transport for what he has announced < em> improvements in actions related to traffic with specific modifications to the network to make it environmentally sustainable .

We show that with small actions, which are not expensive, but are efficient, we give affection to citizens and our visitors and we do our bit to make Granada one of the best cities in the world , has stated.

The staffs with the information panels are located at the Plaza Nueva (1105) and Plaza Isabel la Católica 4 (488) stops. They indicate that there are 2 ways to go by bus to the Alhambra: